The English language was first spoken in England and gradually became well-known all over the globe and is now the third most spoken native language. Ever thought what led to it becoming such a famous language? Its simplicity and lucidity have contributed to the fame this language has received worldwide.

The Roman alphabet system is much easier than the complex fonts and styles of other languages, the the coherence of the writing style with the pronunciation is a magnificent factor in making English easier comparatively which is not the case with most other languages. Now you can also learn general English easily without much effort in this modern era where this language is the most vital of all global languages.

English is one of those rare languages which is gender neutral making it extremely easy to remember and thereby leading to its effective usage. In addition to that, we have a lot of resources to learn English from as many schools all over the world teach in English. Learning a language at a young age is best. You can learn in many ways such as listening to English songs, watching English movies with subtitles making each and every word easy to comprehend, reading an English newspaper every day. Likewise, reading English novels also has a vital role in enhancing one’s skills.

Now, many people think that it’s monotonous to read books and learn English which is certainly true, but then what are internet resources for? YouTube has a wide variety of videos which you can learn English from. Furthermore, Google translate is a great source of learning English effortlessly, all you need to do is to type in your regional language and get the English translation of the same, which will show you the word/phrase you are looking for.

Social media also plays a large role. You can interact with people from around the world to brush up your linguistic knowledge.

All you need to do is start reading about articles, nouns, pronouns, verbs, tenses and you’re ready to go. Talking about articles- there are only two indefinite articles -”a” and “the” and only one definite – “a.”

Getting deeper into grammatical aspects, verb conjugation is super simple using only “s” or “es” to obtain an ending. Once the basics are clear to you, you can master your skills by practising each day and ultimately reach the fluency which is easier than in the case of other languages.

“ Tell me and I forget, teach me and I remember, involve me and I learn”- BENJAMIN FRANKLIN

The bottom line is to start learning the basics of the language and incorporate it into daily life step by step to involve yourself in the journey of learning before reaching the ultimate goal of fluency and flawless English speaking/writing/reading.

Just a little work and consistency can do wonders, so go ahead and start working on your dream. 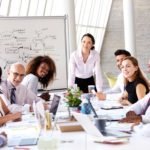