Chevrolet has irrevocably altered the Corvette’s history. The new design of the Chevrolet Corvette features a mid-engine layout similar to some of the most exotic supercars. The company says that the new layout sets the stage for remarkable performance, which wasn’t possible with Corvette’s previous front-end design.

With performance better than before, the new Corvette’s starting price seems like a genuine bargain. The car is powered by a 6.2-liter naturally aspirated V-8 engine. Some notable features include a magnificent dual-clutch automatic transmission (DCT), more technical sophistication, a higher interior quality, and a new look that will win your heart.

Available as a convertible or a coupe, Corvette’s new generation offers 1LT, 2LT, and 3LT trim levels. For those still wondering what makes this car so desirable, let’s have a deeper look into its specs.

Take a closer look, and you will see how the new Corvette resembles its predecessors. All the classic Corvette cues, from the fender sweeps and headlight placement to the quad-element taillights and tapered rear window, are evident in the eighth generation of the car. Nevertheless, with a long tail wrapped around its mid-mounted engine and a cabin in the front end, the eighth generation of Corvette adopts the classic supercar proportions.

The days are gone when Corvette was criticized for its interior. The new model is significantly better in this regard. The 3LT trim level of the latest Corvette features a carbon fiber interior trim, premium leather, and a simulated suede headliner, and its quality!

Other notable features include an all-new infotainment system, digital instrumentation, and a dramatic approach to climate controls and transmission make Corvette’s eighth-generation a thoroughly modern supercar. Chevy never compromises when it comes to Corvette’s performance, but the C8 raises the bar even higher. Its 6.2-litre V-8 engine generates 490 hp at 6,450 rounds per minute, making the Corvette hit 60 mph in around three seconds with a claimed top speed of 194 mph.

The option for a manual gearbox isn’t available in the eighth generation, but the 8-speed DCT transmission is nothing short of perfection. It allows drivers complete control over the gear shifting while driving in manual mode. That is not all. Other driving modes include Tour, Weather, Track, Sport, My mode, and Z mode.

The fuel efficiency of this beauty can easily blow up your mind. The EPA indicates that it gives 19 mpg in combined driving. However, at an average speed of 39 mph, the Corvette covered 146 miles while consuming only 20.5 mpg.

Combine this efficiency with Corvette’s huge 18.5-gallon fuel tank, and you will get a range of almost 360 miles in a single tank.

Unless you plan to hit the race track frequently, do yourself a favor and skip the optional competition sport seats. Even though these narrow, unyielding, and rigid bolsters are great at holding you still while you explore Corvette’s cornering grip, but can be unpleasant for anyone carrying some holiday weight.

The highly functional active exhaust system of the C8 allows you to run the car louder or quieter, depending on what you prefer. What’s more interesting is despite housing a massive engine immediately behind its seats, the new Corvette is much quieter when sitting inside than when standing outside.

Equipped with dual-zone climate control, the Corvette keeps you cool in the summer heatwave. The Corvette coupe nearly feels as open to the natural elements as its convertible variant with the roof panel removed.

The 2021 Chevrolet Corvette is an excellent example of a perfect American sports car. Teased through several concept cars dating as early as the mid-60s, Corvette’s mid-engine layout isn’t just a concept anymore. It’s as real as you and me. And while few traditional Corvette fans might disagree that the C7 is the final member to carry on Corvette’s unchallenged legacy, the majority of Corvette enthusiasts undoubtedly recognize Chevrolet Corvette C8 as the revolutionary automobile that it actually is. 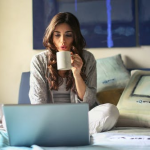